Why is it good for dogs to roll on the grass, have you ever asked yourself? Sometimes dogs seem to have fun doing it, and sometimes they seem to try to throw something out of them.

Animal carers and animal behavior specialists have suggested that this habit may be related to hereditary factors. Battle Ground at the Wolf Park in Indiana (Wolf Park) According to researchers, wolves tend to roll in odors that attract their attention.

After the wolves come back to where they are, they are greeted by the herd, and during this welcome other wolves thoroughly investigate the smell of the arrivals. 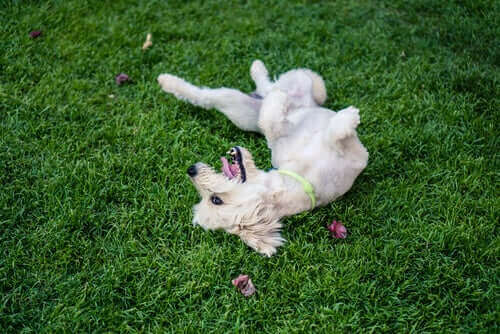 But besides your dog’s genetics, there are other reasons why he loves grass so much. In this article, we will look in more detail on the most common reasons why pet dogs like rolling on the grass.

It is a fact that rolling on the grass serves many purposes. For example, this is a way to get rid of dirt and dust that is irritating and itchy for dogs.

Dirt, plant sap, bird droppings, leaves, and anything that might cling to your back can be uncomfortable for them.

Your dog’s need to roll on the grass at the same time it may be a sign of a itching health problem. These problems can be skin allergies, flea bites or ticks.

If you think this is the case, you should take your dog to the vet to find out the underlying cause of this movement. We also recommend that you take a protective measure against fleas and ticks.

One Way to Leave Odor

Another reason, is that there is a specific smell in a certain part of the grass. Some predators like to surround themselves with pungent odors, and dogs are also in nature hunting.

The speculation behind this behavior claims that the new scent helps hunters hide their own scent from their prey. For example, a wolf or jackal may roll in a place where a rabbit has recently passed. In this way, the hunter will hide himself with the smell of his prey, that is, he will smell like him. Researchers believe that this allows wolves and jackals to get closer to their prey and perform a more successful hunt.

A comparative study was carried out on the smell ability of humans and animals. This review supports that some mammals, such as mice and dogs, are more sensitive to smell than humans. Moreover, it seems to be good at distinguishing the different intensities of a fragrance.

Reports of the same researchers comparing dogs and humans support that smell sensitivity in dogs is higher than in humans. For example, in 1984, Krestel et al., Dogs (beagle breed) are said to be about 300 times more sensitive to certain specific odors than humans.

Rolling in the Grass: Relaxation or Dermatological Discomfort?

Finally, your dog may also be rolling on the grass, just because it feels good. What could be better than soft grass, where you can scratch your back and feel the warm sun while yawning?

Observe how comfortable or tense your dog is when rolling on the grass. When the paws turn left and right with slow and comfortable movements in the air, it means their emotional health and mental state.

How much energy and force he rubs his face, neck and back on the lawn may indicate that dogs clean their hairs or react to a smell. But if your dog’s behavior is very tense, repeats too long or takes too long, then you should consult your vet. This behavior may mean that something, such as a dermatological problem, bothers your dog. 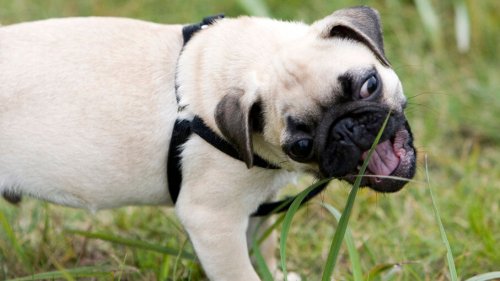 Dog Causes of Eating GrassWhy do dogs eat grass, have you ever thought? The first answers that come to mind are because they “want to purify their intestines” or “their stomachs hurt”. Read more »
April 12, 2020 admin Pets Leave a comment